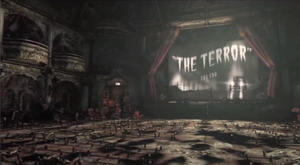 Looking for the challenge map?

The Monarch Theatre was a movie theater that was located in the Park Row District of Gotham City.

It was perhaps best known for being the last location Thomas and Martha Wayne were seen alive in public before their deaths in Crime Alley.

Years before the Arkham Origins Incident, The Wayne Family went to watch an unknown movie. Afterwards, they decided to pass through the Crime Alley, which led to the demise of Thomas and Martha Wayne. This incident influenced the only surviving member, Bruce, to start his training around the world, and directly led to the creation of Batman.

After Batman escaped from Wonder Tower, Joker announced that he had taken Talia al Ghul to the Monarch Theatre and planned to killing her, unless he showed up. Batman arrived at the Monarch Theatre, where Joker demanded, at gun-point, that Batman hand over the Titan Disease Cure.

Confused at Joker's statement, as Batman thought that Joker had already stolen the cure, Talia ran her sword through Joker and revealed that she had stolen the cure from Harley Quinn earlier at the Steel Mill. Realizing too late that the Joker that Talia had killed was not the real Joker, Batman watched as the real Joker killed Talia with a gun from the theatre's upper level, while the one Talia had "killed" revealed himself to be Clayface, who had accepted Joker's offer to fill in for him simply for the role of a lifetime.

After he took in the cure from Talia's corpse, Clayface and Batman fought, with Batman using his Freeze Blasts to freeze Clayface and carve him up with Talia's sword. With Clayface apparently defeated, Joker detonated the theatre's floor, caused it to collapse, and revealed Ra's al Ghul's Lazarus Pit that was directly underneath the theatre in Wonder City.

As Batman defeated Clayface a second time and retrieved the cure, Joker attempted to gain immortality through the Lazarus Pit, but Batman destroyed the pit before Joker could enter it. Demanding that Batman give him the cure, and appealing to the hero's "no killing" code, the Joker became impatient when Batman briefly considered allowing him to die. Attempting to take the antidote by force with a knife, Joker caused Batman to drop the vial, and it shattered on the floor.

Batman stated that the "funny" part was that he had actually decided to give Joker the antidote before he attacked him. Joker agreed that it was actually hilarious and died laughing with a smile on his face. Batman carried Joker's body out of the theatre past his henchmen and Harley Quinn, and left it on the hood of a GCPD patrol car outside of Arkham City.

The Monarch Theatre back door was briefly seen in a hallucination near the end of the game. In addition, the Theatre reappeared as a Combat Challenge Map in the Community Challenge Pack.

The Monarch Theatre in Arkham City.