Mister Hammer, also referred as Mr. Abramovici, was The Joker's one armed lieutenant in his army. After Joker's death, he later joined Black Mask. Mr. Hammer was mentioned to be with his conjoined twin, Sickle, and performed at a Russian circus. However, they got into a fight and split up, literally.

Mr. Hammer was born as a conjoined twin along with Sickle in Russia. Their mother died in childbirth, and their father left them to a traveling circus where they performed in a animal wrangler/freak-show act. When the Joker caught wind of the Abramovici Twins and their reputation for brutality, he sent Harley Quinn to recruit the pair into his gang.

Although the circus manager initially refused to give them up, he was later found with a Glasgow smile carved into his corpse and the twins vanished. Once he had the twins in Arkham City, Joker realized that they would be more useful separated and hired Dr. Thomas Eliot to do the deed, then decided that he only wanted a "right hand man." Joker decided to only keep Mr. Hammer while he disposed of Sickle.

During a breakout at Arkham Asylum, Mr. Hammer was one of several henchmen working for the Joker and Harley. He fought the Batman but was eventually defeated.

One of the many whims that Joker indulged in was watching Mr. Hammer beat those who disappointed him to death, mostly the doctors who failed him. When Batman infiltrated the Steel Mill to find and interrogate Joker on Protocol 10, he was forced into a fight with Mr. Hammer after he smashing open the doors to Joker's office. After a brutal fight against the Twin, Batman left him unconscious to confront Joker.

After the fight with Mr. Freeze, Batman returned to the Steel Mill to find and fight Joker. The Joker then sarcastically feigned defeat before he welcomed in a multitude of thugs, Mr. Hammer, and a Titan Henchman. After he defeated all of them once again, the building collapsed on Batman due to a missile strike from Protocol 10. After the Joker's death, Sickle and Mr. Hammer could be found together in the Assembly Line at the Steel Mill, talking about getting reattached.

If you scanned them, you solved the riddle: "One assembled, do these two become one again?" Although the Abramovici Twins were both enemies, they would both ignore you if you did anything.

After Joker's death, Robin went to find Black Mask, who became the new gang leader in Arkham City. Robin went to Black Mask's hideout, where he found out that some of the Penguin's Henchmen joined him, and that the Riddler was also helping him. Lastly, Robin went onto the Freight Train and beat through some of the Joker's Henchmen, that had also joined Black Mask. After he got through three cars, Robin came to the end to find a few Joker thugs, Mr. Hammer, and Black Mask blocking the control box. After he beat the thugs and Mr. Hammer, Robin left Black Mask for last, apprehended him, and destroyed the control box that was moving the freight train. It could be assumed that Mr. Hammer and Sickle were taken to temporary holding cells when the GCPD invaded the mega facility.

Mr. Hammer and Sickle were both working for the Penguin by that point, who tasked them both with tracking down Scarecrow for his next plan. The Abramovic Twins succeeded, but Scarecrow captured them and tortured them for several days. When Scarecrow finally let them go with a message for Penguin, they were sewn back together, and Mr. Hammer had to drag Sickle to the Iceberg Lounge to deliver it. Penguin had the Abramovici Twins treated at the Arkham City Hospital and had to hire Tweedledum and Tweedledee to replace them while they recovered.

At some point prior to the Arkham Knight's attack on Gotham, Mr. Hammer rejoined Harley's gang. When a group of thugs attempted to take over the West End Meatpacking Plant, Mr. Hammer accompanied Harley and a group of other henchmen to stop them from muscling into what had formerly been Joker's territory. They interrupted Batman's assault on the thugs and subsequently succeeded in killing all of the attacking thugs involved before taking on Batman. In the ensuing fight Mr. Hammer was knocked out along with the rest of Harley's entourage, and only Harley was able to retreat safely from the Batman's assault. 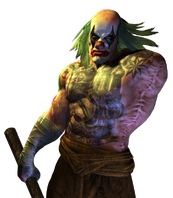 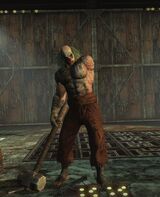 Mr. Hammer ready to fight Batman in the Loading Bay at the Steel Mill