Raised by his parents (better known as the "Flying Graysons") in a circus, Dick Grayson was trained to be incredibly acrobatic. His parents were killed after criminals had failed to extort money from the circus. Dick was soon adopted by billionaire Bruce Wayne, who shared his secret identity and extensively trained the boy to become Batman's sidekick, the first Robin. After he aided Batman for years, Dick eventually moved on and became a hero in his own right. As Nightwing, he patrolled both Gotham City and Blüdhaven, and worked with Batman no longer as a sidekick, but as an ally. He was the main protagonist of the GCPD Lockdown DLC of Batman: Arkham Knight. He also served as a side protagonist in The Season of Infamy DLC, in the mission, Beneath the Surface.

Dick Grayson was part of a circus act alongside his mother and father, and they were known as the Flying Graysons.

After the Christmas Eve Incident, Dick's parents were killed by mob boss, Tony Zucco. Bruce felt sympathy for the boy, and after he remembered his own tragedy, he adopted Dick. Dick eventually discovered Bruce's secret identity as Batman. Wanting to help his friend and father-figure, Dick developed the identity of Robin: The Boy Wonder. Together, the Dynamic Duo took down both criminals and super villains.

Dick assisted Batman in stopping the gang wars between Bane and the Joker. Those events took place before Dick's assumption of Nightwing.

After a long career as Robin, Dick eventually decided to fight crime alone, became Nightwing, and patrolled Blüdhaven. Two young boys took his place. The first was Jason Todd, who was assumed to have died at the hands of the Joker. The second was Tim Drake, an intelligent boy who had managed to deduce both his and Batman's identities and took up the mantle of Robin. The two formed a brotherly bond.

Nightwing helped Batman investigate the mysterious Abramovici Twins, whom he heard stories about during his childhood as an acrobat. Alongside Batman, Nightwing concluded that Thomas Elliot had performed their separation.

Nightwing remained in Wayne Manor during the events of Arkham City, and guarded the manor from armed intruders. During Protocol 10, Hugo Strange sent a number of TYGER Guards to Wayne Manor to kill Batman's allies and uncover more of his secrets. However, Dick was training in the Batcave, and was able to fend off the TYGER Guards until the GCPD arrived.

Nightwing managed to capture Poison Ivy, and made sure that she was imprisoned in Blüdhaven until her transportation to a secure cell in Gotham City could be safely arranged. When Harley Quinn raided the Blüdhaven police department to free Ivy, and easily massacred the police officers, Nightwing showed up to stop her. Displaying a surprising dexterity in combat, Harley was able to hold her own against Nightwing until she managed to break Ivy free. Poison Ivy used her plants to subdue Nightwing, and both she and Harley escaped.

After he tracked a weapons smuggling operation for several weeks, Nightwing was able to deduce that The Penguin was the boss, and he returned to Gotham to bring him to justice. Nightwing met with Batman, delivered the Disruptor designed by Lucius Fox, and assisted him in taking down Penguin's new business. While attacking one of Penguin's warehouses, Batman was quickly overwhelmed before Nightwing's intervention. The dynamic duo spent the rest of the evening tracking down Penguin's warehouses and destroying the weapons held within.

After several hours, Nightwing alerted Batman to an airship that crashed just off the Miagani Island Bridge. Further investigation revealed it to be the Iron Heights Penitentiary. Nightwing traveled through the prison alone, and deduced from the wreckage that Killer Croc must have been the cause of the crash at the same time as Batman. The two worked together to apprehend some escaped inmates. They learned from Prison Officer Blackburn that Croc had kidnapped Warden Ranken and taken him to the maximum security area of the ship. before splitting up once again, with Dick helping the surviving guards escape and Batman going to find the key cards to access the maximum security area.

Upon Batman's return, the two worked used the key cards and activated the door. After getting past the security door, the Dynamic Duo found video footage of Ranken experimenting on Croc and the other inmates in order to weaponize Jones's regenerative healing abilities. They then intervened as Croc was about to inflict retribution on Ranken. They defeated the prisoners and ultimately managed to defeat Croc. Nightwing helped Batman deliver Croc, Ranken, and the prisoners to the GCPD Lockup.

Later, Nightwing attempted to finish the hunt for Penguin alone, but was quickly subdued. Batman arrived and attempted a rescue, which prompted Cobblepot to hold Nightwing at gunpoint. During this time, Nightwing also briefly alluded to his past as a member of the Flying Graysons to Penguin, who doesn't know who they were. Batman and Nightwing worked together to knock Penguin out, before Batman issued his final goodbye, and told Nightwing that he was proud of him. Nightwing reacted very negatively to the implication that Batman wouldn't make it, but ultimately promised him to keep Blüdhaven safe once he was gone.

3 months after The Knightfall Protocol, Nightwing lived up to his promise, and did his best to keep Blüdhaven safe. After Penguin's final base was destroyed, one of Cobblepot's henchmen revealed that there was an escape attempt at the GCPD that was going on right at that moment. Nightwing arrived, and, working with remote assistance from Lucius Fox, was able to shut down the attempt, and insulted and antagonized Cobblepot as much as possible in the process. After returning the Penguin to his cell, Nightwing made it clear to an appreciative Aaron Cash that he planned on sticking with Blüdhaven, and left Gotham in the hands of Robin and Red Hood.

Often lighthearted and upbeat, Nightwing was a stark contrast to his stoic and serious mentor. He would often even make jokes while battling his enemies. His sarcastic demeanour, however, hid more pain than Nightwing would let on, especially regarding his parents accidental deaths which he witnessed as a child. A flaw Nightwing did possess aside his cocky nature was he could be occasionally reckless and overconfident, not thoroughly scanning an environment or underestimating the danger of a situation which led to his capture at Penguin's hands. This happened again after finishing a group of thugs with the help of Batman, he was overpowered and held at gunpoint by Penguin despite being relatively smaller in stature and less skilled. Nightwing, at times could develop a cruel sense of humour regarding his enemies. For example after Penguin was about to escape GCPD, he asks Lucius Fox to cut off the lights in the elevator which he was trapped within, having previously learnt that he was afraid of the dark. He does this again where atop the GCPD, pretends to be one of Penguin's henchman claiming they had defeated Nightwing and allows him to walk outside, thinking himself free only to be imprisoned yet again.

As Nightwing (in Arkham City and Arkham Knight), Dick Grayson had the following gadgets:

As Robin (In Arkham Origins), Dick Grayson had the following gadgets:

In Arkham Origins, Dick featured a more armored version of the Robinsuit, that consisted of red and black colors, similar to his replacement, Tim Drake. Dick also wore padded blue/dark blue pants, and red boots. In an alternate design, he wore yellow instead of black.

In his later years, Dick had a more proper hairstyle, with a cowl like domino mask, and a black and blue suit, but he lacked most of a logo, with it literally being a V shape. Dick's suit formed similarities with his Injustice counterpart's suit.

Thanks to Bruce and Alfred's influence, the two had very contrasting personalities. While his mentor was cold and very serious, Dick's demeanor was quite the opposite. Dick was a naturally lighthearted individual, and made wisecracks every now and then to lighten the mood.

Dick Grayson as Robin along with Batman in Batman: Arkham Origins Multiplayer 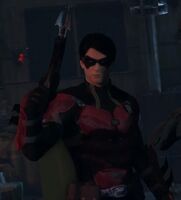 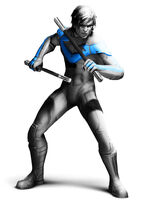 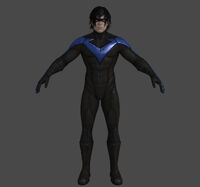 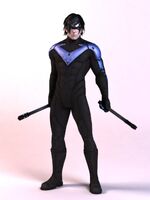 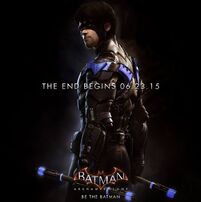 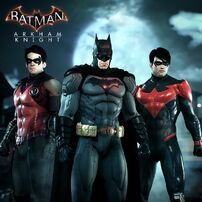 GCPD Lockdown: Set after the events of Arkham Knight, play as Nightwing to stop the Penguin from breaking out of the Gotham City Police Department in this thrilling story pack.