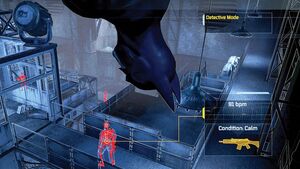 Predator Mode is a situation where a character takes out enemies armed with firearms in the Arkhamverse. It typically takes place in a room, but can also happen outdoors.

Predator Mode is used in areas with several armed enemies, who can easily overcome even the most experienced players if they were taken head-on. Thus, instead of using Combat variations, players are supposed to target enemies with stealthy hit-and-run tactics to pick them off without being overwhelmed by their superior firepower. Ideally, players are to target isolated Thugs and take them out one at a time by using Takedowns or gadget traps while they remain undetected. That is not to say Freeflow Combat can't be used in Predator Mode; each hit deals a lot more damage than it would in Combat Mode, simple counters can easily take out Armored Henchmen; however, Special Combo Moves cannot be used.

In most Predator Rooms, Batman can grapple up to a Vantage Point to see the area from above where he can see most of the enemies from a single location, glide behind unaware enemies, and then proceed to take them them out with a Silent Takedown. However, if Batman's enemies realize that he is using these Vantage Points, they will often either mine them or shoot them down to prevent their continued use. In Batman: Arkham Knight, Batman can instantly travel from Vantage Points to underground vents (and vice versa) via chutes near the ceiling.

Batman can also use vents to his advantage and hide under his enemies. Using vents, Batman becomes invisible to his enemies, but these hiding spots are limited by the vent system's small size. If the opportunity rises, Batman can instantly take out anyone standing over him. Before Arkham Knight, vents are mostly simply small areas that the player can hide in, but in Arkham Knight, they become a major way of moving around, often covering most of the bottom floor, but with a few usable exits. If enemies see Batman in/entering the vent, they fill the vents with burning gas, which destroys the vent cover and damages Batman in the process, unless he manages to escape or get out of the vicinity beforehand.

In Batman: Arkham Asylum, Batman: Arkham City, and Batman: Arkham Origins, most enemies carry an alarm that goes off if they are knocked out. As the alarm activates, the announcer notices it, and informs the henchmen of its location. Fortunately, the alarm takes several seconds to activate, which allows Batman to escape. In Arkham Knight, enemies no longer carry these alarms, but their leaders regularly ask for updates (after around every 3 Silent Takedowns) and become suspicious if somebody doesn't answer.

In both Batman: Arkham City and Batman: Arkham Origins, some Predator Rooms have a special, non-hostile NPC in them. After the enemies become aware of Batman, there's a chance that they will walk to the hostage and take him/her as a human shield. If this happens, the player is forbidden from using some gadgets against that particular thug, and needs to sneak behind them when the thug's back is turned. If the thug sees Batman, he shoots the hostage, and the player needs to restart from the beginning.