A dark reflection of Batman, Prometheus was raised by criminal parents, who were gunned down by policemen right in front of him. Dedicating his life to destroying the law, Prometheus traveled the world and trained in the ways of murder. Clad in an armored suit that maximizes his natural skills, he is a master assassin whose physical and mental abilities rival Batman's own.

It was around this time that Prometheus's parents were murdered by the police and he decided to become a criminal.

It can be assumed he hadn't started his criminal life yet at this time, as he wasn't even considered to be hired by "Black Mask" to assassinate Batman. Seeing as he is an incredibly gifted assassin, this would be odd. Unless, of course, Prometheus wasn't for hire.

He'd definitely started his criminal life by this point. He had been apprehended by Batman at least once and was sent to Arkham Asylum, where he was treated by (presumably) Dr. Young, as she had taken personal notes on him.

It can be assumed he escaped the asylum before Joker's riot, as he was not encountered during the game. A newspaper clipping about him could be found in the Penitentiary.

He didn't appear before Batman during the events of Arkham City. However, this could be because he hadn't been taken into the mega-prison. He was a great assassin, so it would be very difficult to apprehend him (especially when TYGER didn't have any help from Batman). If he had been incarcerated, however, he might have kept a low profile to avoid drawing attention (although this seems unlikely, given his profile).

Prometheus made no appearance during the night of Halloween. This means he hadn't made an alliance with Scarecrow, Deathstroke, and the Arkham Knight. Possibly he had left Gotham City at the time, along with the other civilians. 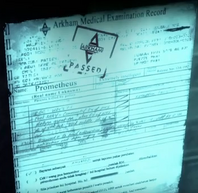