Batman: Arkham Asylum (Summer 2009)
Dr. Sarah Cassidy was working at Arkham Asylum while assigned to the case of serial killer, Victor Zsasz . She was stalked and targeted by Zsasz after his most recent escape. Dr. Cassidy was good friends with Dr. Gretchen Whistler, another Arkham doctor. She lived alone in a Gotham City apartment with her cat, and maintained a good relationship with her best friend, Garianne. Dr. Cassidy worked the night shift at Arkham's Medical Facility during the fourth week of every month.

Dr. Cassidy was assigned to Victor Zsasz to try and reason with him through therapy. She told him that they should get to know each other, and he told her that he didn't need to know her, as "everything is meaningless". Dr. Cassidy thought that Zsasz's view of life was very negative, and he asked if she read his file. She described how it said that he was born to a rich family, how his parents died, and how he lost the money gambling. Zsasz simply said, "none of it matters", and that only the "mark" matters. Zsasz described his "work" to Dr. Cassidy, said that he had a spot for her mark, and asked if she would like to see where.
In the next interview, Dr. Cassidy continued to discuss Zsasz's victims, and pointed out that 20 women were killed in Gotham and left in life-like poses. Zsasz referred to all his victims as "zombies", who worked through the "daily grind", waiting for someone to "liberate" them, and said that the 20 women were all "lucky" to receive his "gift". Zsasz asked the doctor how she felt when she went up the elevator and into her apartment every day. He expressed knowledge of where Dr. Cassidy lived, and mentioned the six locks to apartment 433 and pointing out that she forgot to buy her cat food...again. She asked how he knew that, and Zsasz went on to say how Dr. Cassidy sat in her favorite red chair, cat on lap, and was "waiting for something to happen". Zsasz told Cassidy that he could "make it happen", and that he was Sarah's "salvation".

Terrified and shocked by Zsasz's knowledge, Dr. Cassidy went on leave from Arkham to get away from him. Dr. Whistler was assigned as Zsasz's replacement doctor. He told her that he was depressed. She asked why he was depressed, and he said that it was because of the "one that got away", the one he "chose" (a reference to Dr. Cassidy). He said that he needed her "mark" and voiced that he wanted it several times during their next interviews. Zsasz later attacked a security guard out of fury and was placed in an isolation cell.

In one of her next interviews with Zsasz, Dr. Whistler recalled Zsasz's isolation and was quite aware of his fixation on Sarah Cassidy. A guard rushed in and told her that Zsasz had escaped. She was frightened, but the guard told her that it was safe and that Zsasz had definitely left the island. Relieved at first, Dr. Whistler alerted the guard that Zsasz would need to kill again and urged him to warn the authorities. She quickly realized that he had gone after Dr. Cassidy, and called Sarah to warn her. Before she could tell her of Zsasz's escape, Sarah said that someone was at her door.

After answering the door, Zsasz kidnapped Sarah. Zsasz took Dr. Cassidy to an Old County Hospital in order to kill her. Zsasz held a knife to Cassidy's head and prepared to stab her, but was thwarted by Batman. An anonymous tip had been found in Cassidy's office, which lead Batman to the hospital, where he saved Dr. Cassidy from her gruesome demise. Zsasz was subsequently put back in his cell at Arkham Asylum.

This particular info could also be found in Batman: Arkham City, when, during Zsasz's Side Mission, you could go on the Batcomputer in map form, where you could see Zsasz's Casefile feed.

Dr. Cassidy was among the many doctors present during the Joker's takeover of Arkham Asylum. An army of Blackgate Convicts that were temporarily housed at Arkham broke free, seized Arkham West, and were led by the Joker and Harley Quinn. Cassidy was oblivious to the situation outside the Medical Facility. She was in working in her office in the Medical Facility's Sanatorium when armed Blackgate convicts led by Quinn burst in, and were under orders from the Joker to capture all the doctors working there. They shot the asylum guards in the Upper Corridor and killed several medical staff while rounding up two orderlies and another doctor. They dragged Dr. Cassidy out of her office and into an adjoining room while Harley Quinn proceeded to the Medical Foyer with a captured police Commissioner Gordon, who had been at Arkham to supervise the Joker's transfer, in tow.

Cassidy attempted to resist her assailants, but they held her at gunpoint. Dr. Cassidy reluctantly complied with them while holding back tears. Discouraged in the face of the impending situation, she cried quietly in a corner as the Joker 's men strapped two orderlies into electroshock chairs to prevent escape. However, one of Joker 's men complained and told her to stop crying.

As the convicts stood guard, Batman found a way into the Medical Facility upon arriving from Arkham East. He contemplated why the Joker would want all the doctors and gained access to the Sanatorium through a ventilation shaft in Maintenance Access. Batman defeated the convicts holding the doctors prisoner and approached Sarah. Sarah explained that she was carrying out her normal duties when armed thugs came in and captured her. She and another doctor explained that they heard gunfire from the Upper Corridor, and that Dr. Adrian Chen had gone to the Surgery Room, Dr. Stephen Kellerman had gone to Patient Observation, and Dr. Penelope Young had gone to the X-Ray Room. Batman advised the doctors to remain in the Sanatorium before he left to search out the other doctors. Dr. Cassidy set to work freeing an orderly in one of the electroshock chairs. After she and another doctor had freed the orderlies, they examined one of the convicts Batman had defeated earlier while awaiting his return. When Batman returned with Aaron Cash and Dr. Young, he found that the elevator was bringing someone up from Secure Access. He left Dr. Young with Cash to go retrieve her notes at the Arkham Mansion, and ordered Cassidy to go to the Patient Observation Room with the orderlies and barricade herself inside. Cassidy left the Sanatorium, and followed Batman's instructions. She regrouped in the Patient Observation Room with Dr. Kellerman, and the two doctors helped seal off the room with large pieces of furniture, mainly cabinets and desks.

Dr. Cassidy remained in the Patient Observation Room, and conversed in low tones with Dr. Kellerman for the remainder of the Joker 's takeover, which ended as Arkham's remaining security forces and the GCPD retook control of Arkham Island. Cassidy survived the attack on Arkham and returned to her duties after the Joker was placed back in custody. It was unknown if she met her former patient, Zsasz, during the takeover, as he had been freed from his cell during the chaos.

Dr. Cassidy survived the events on Arkham Island and returned to her normal duties after GCPD Officers took control of Arkham Asylum and Joker was taken to custody before it was closed down by Mayor Warden Sharp.

Dr. Sarah Cassidy was mentioned in Arkham City, she was noted in the Batcomputer's reference of Zsasz's recent crimes, with his attempted murder of Dr. Cassidy being the most recent. 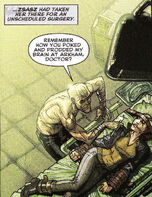 Cassidy being held hostage by Zsasz 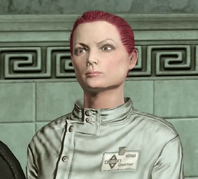 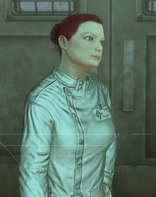 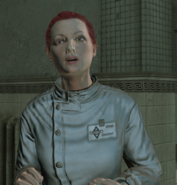 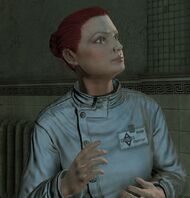 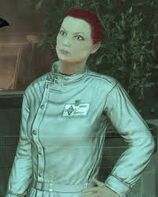