Gotham's Blackgate Penitentiary once had a Gallows Tree from which 313 criminals with death sentences were hanged. The wood from that tree was whittled by an inmate into the puppet Scarface, and that inmate was murdered by Arnold Wesker, a man who soon fell under Scarface's influence. While most believe that Scarface is simply a tool through which Wesker, as the criminal mastermind, the Ventriloquist, acts out a dark side to his personality, Wesker himself believes that Scarface is possessed by the souls of who died beneath the Gallows Tree, and the puppet actually motivates him to commit the duo's many crimes.

Before the Assault on Arkham incident, Scarface was carved by an Blackgate inmate. Arnold Wesker began to "hear" the puppet call to him. Scarface "told" Wesker to kill the inmate and take him for himself. Wesker did so and became The Ventriloquist. At some point, Harley Quinn encountered them in prison, finding herself delighted by the actions of the inseparable duo.

Eventually, Wesker was transferred to Arkham Asylum and he took Scarface with him.

When the Suicide Squad break into Arkham Asylum's Storage Facility, Captain Boomerang was startled upon stumbling upon Scarface.

When Arkham was reopened Scarface was put in a glass case along with all of the other super villains' personal items.

Scarface appears in a display case in the Warden's office as the answer to the riddle, 'Isn't the Warden too old for a puppet show?' He then appears during the third Scarecrow nightmare as the new Warden of the Asylum, talking on a screen. He does this both in the cutscene and the nightmare itself.

It seems the Joker had managed to get hold of Scarface, as he was talking to himself through Scarface near the end of the game via a fictitious argument while trying to vent frustration on Batman arriving at his location, where he had managed to carve a smile on Scarface's mouth, almost like a Glasgow Smile.

After their escape from the Asylum, Joker often played with Scarface, using the doll to insult Harley, which incensed her as she had a prior past with the doll when it was being used by Wesker and Riley.

One of the Joker's henchmen, Mugsy Binks, realized how much his boss enjoyed the doll, so he stole Scarface from the asylum. He made several copies in order to keep his boss's favor. This freed the Joker to mutilate any puppet that failed to amuse him. If he destroyed one in a fit of anger, Joker simply picked up another.

During the events of Harley Quinn's Revenge, Scarface is shown painted up like Joker laying inside a baby carriage.

A copy Scarface was kept in the GCPD evidence archive. 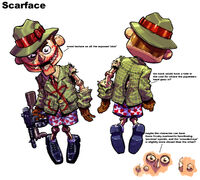 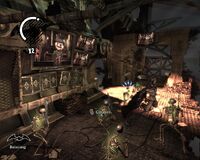 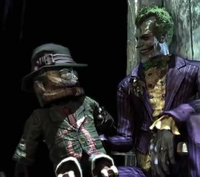 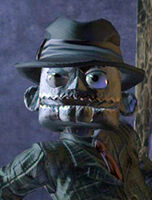 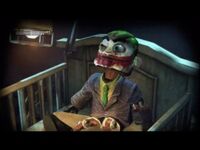 Joker Scarface in a crib 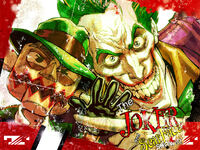