Smilex, also referred to as "Happy Gas" by the Joker, and "Joker Toxin" by others, is a nerve toxin that attacks the nervous system of its victims, causing a slow, painful death. When inhaled, it induces fits of laughter, then stretches its victims face into a Joker-like grin, shortly before death. The toxin is also very dense, keeping close to the floor or ground. This fortunately allows would-be victims to climb to a higher point of safety if they react quickly enough.

There were many variations of Joker Gas, existing in both liquid and gaseous states, and it also affected animals such as cats, squirrels, and fish. The gas form is slightly denser than air, and in some portrayals, dissipated over time.

It appears as an obstacle in many areas, and often has to be removed somehow before Batman could proceed. Falling into the Joker Gas is lethal if the "escape" button was not hit fast enough.

The Joker, under the guise of Black Mask, used Joker Toxin on the Gotham Merchant's Bank Manager, which caused her to have a laughing fit even as she declared him insane.

In the map "Joker's Funhouse", Bane's Henchmen were trying to seize control of Joker's Smilex Factory by defeating Joker's guards, while Batman and Robin tried to shut it down.

Joker filled some rooms with the gas to either just slow down or to kill Batman. If Batman was exposed to the gas, a breath meter appeared in the upper left corner. If that meter ran out, Batman started to lose health. The effects were negated if Batman got away from the Joker Gas. Some of the gas chambers could be turned off when a certain gadget is acquired. Joker also revealed that he intended to leak the gas throughout the entire administrative building and throughout Blackgate Prison. The gas itself was created using various materials within the prison, and was procured by Harleen Quinzel.

Before A Matter of Family Incident

Sometime before the event's of Batgirl: A Matter of Family, after the death of Katie Burke, her father, Edward Burke, became extremely depressed, and was driven to the brink of suicide by Harley Quinn, who posed as a doctor by using her real name: Dr. Harleen Quinzel. Joker, who used the fake name, Jack White, gave Edward some pills to end his life quickly and without pain. In reality, those pills had the same effect of Joker Gas. Edward died in extreme pain, and laughed uncontrollably until his death.

During Batman: Arkham Asylum, the Joker raided the Decontamination Chamber of Arkham with canisters of Joker Gas, pumped it into the room, and killed ten guards and several of his own men in the process. Three guards and an inmate managed to climb to safety, and were quickly rescued by Batman, who knocked out the inmate to keep him out of trouble. Batman then found that the gas had overcome those who tried to operate the extraction system, which would ventilate the gas out of the room. The area was sealed off after the gas was detected, but was re-secured after Batman destroyed the extraction system fuse box with a Batarang, and triggered ventilation fans to filter the deadly gas out of the room.

The Joker also attempted to pump it into the Medical Facility's Patient Observation Room to kill Dr. Stephen Kellerman, an Arkham doctor, and security guard, Aaron Cash, and trapped one of his own men inside as well. Cash and Kellerman succeeded in surviving the attack by barricading themselves in an airtight room, which allowed enough time for Batman to arrive and get rid of the gas. Uncharacteristically, Batman did so by deliberately exposing another person to mortal peril, by dropping an inmate onto a weak ceiling to break it, though he acted quickly to vent the room and prevent the man from succumbing to the gas. Later on, Joker started to attach some cylinders of the gas into several security controls in the Botanical Gardens, the Intensive Treatment Center, and in the Caves when he planned to pollute the Gotham City River with the Titan waste products, if Batman failed to correctly hack the security panels the gas canisters would spray Batman enough to daze him. When playing as Joker, one of his attacks had him spray a cop with a can of Smilex, but it did not kill them, it just dazed him instead. Smilex is also used by Joker during predator challenge maps, where he'd spray the toxin at guards from the flower in his lapel, quickly killing them.

After Joker's death, Harley Quinn planned revenge on Batman. After she knocked out Batman, Harley locked him in a giant Joker statue. Two days later, Robin came to rescue Batman. After Robin defeated Harley, he saved Batman and discovered that the facility had a lot of Smilex bombs, and Batman had to deactivate them all before they detonated. After he deactivated all of the bombs, Batman went to defeat Harley. Harley used her Mechanical Guardians to attack Batman, and, after she saw that her plan didn't work, she reveals her failsafe: a hidden bomb in the Joker Statue. Harley set it off to kill herself and Batman, but failed when the Dark Knight leaped out of a window, and carried her with him. 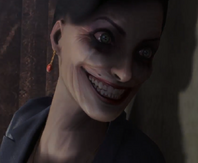 The effects of the gas

Joker Toxin is an obstacle for several areas in the video game Batman: Arkham Asylum 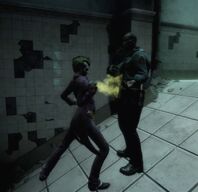 Joker spraying Smilex from his flower 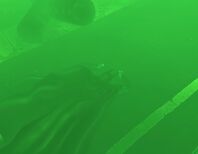 Batman falls victim to the toxin

Arkham guards being exposed to the toxin

The observation room of the Arkham Medical Centre flooded with gas

Joker using Smilex to defend himself from guards 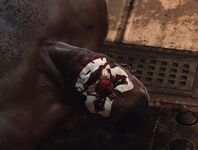