Over a century ago, murderer Cyrus Gold sought to escape justice by hiding in Slaughter Swamp, where he met a fate worse than death. Mysterious forces doomed the now immortal Solomon Grundy to an endless cycle of death and rebirth.

Batman has encountered him twice in his crime-fighting career, during the events of the Blackgate Riots and during Arkham City. In later years, he became one of Penguin's secret weapons and a way to fatally punish minions.

Cyrus Gold was a murderer who sought refuge in Slaughter Swamp. He was somehow killed and he was then found by Ra's al Ghul, who used him to experiment on, in order to perfect his Lazarus Pit. Gold ended up in a cruel cycle of being killed and then brought back to life. After being murdered so many times, Gold forgot who he was and what he did, and only remembered an old nursery rhyme about Solomon Grundy, after which he named himself.

Under Blackgate Prison, Batman found a locked door with Solomon Grundy behind it. Grundy escaped, ran toward Batman, and forced the Dark Knight to slow him down by activating nearby fuse boxes with his Explosive Gel Launcher. Batman ended the fight by knocking Grundy into the door, which caused it to break open.

Solomon Grundy once went on a rampage in Wonder City, before being killed again by the Wonder City Guardians. Grundy was then brought to a place where the Iceberg Lounge was built. He remained there until Penguin found him when he bought the nightclub. Grundy remained imprisoned underneath the Lounge until Bane, disguised as a street thug, infiltrated The Iceberg Lounge and demanded Penguin give him TITAN he had stored away. However, Penguin unleashed Grundy who had inhuman strength and almost killed Bane, forcing Bane to retreat.

Grundy encountered Batman underneath the Gotham City Sewers and started chasing the Dark Knight. However, Batman overpowered and defeated him.

Grundy was trapped under the Iceberg Lounge and was used by the Penguin as an emergency against Batman. It was also revealed that between his resurrection and his imprisonment under the Lounge, Grundy was captured and experimented on by scientists in Ra's al Ghul's Wonder City, presumably to perfect the Lazarus chemicals that powered the lost city. When Batman confronted Penguin, the latter detonated the floor underneath the detective. Penguin woke up the giant zombie with his generator,and forced him to fight Batman. Batman destroyed the generators that powered Grundy with his Explosive Gel. In the process, his undead body was even more damaged and rotten. Batman managed to defeat him by exposing his ribcage and destroyed his heart. After Batman returned to the Iceberg Lounge, Grundy's body was never seen. However, since Batman destroyed Grundy's heart, it was safe to assume that he died yet again.

It could be assumed that Grundy was still at the bottom of the Iceberg Lounge after Protocol 10.

Though Grundy himself never appeared in the Prequel Comics, 7 clones of him, named after the days of the week did. The clones worked alongside Calendar Man to help kill Batman.

While Grundy never appeared in the story, he could be seen in the poster for a movie. Somebody also built a shrine that played Grundy's creepy nursery rhyme in a loop on a gramophone along with a wanted poster of him from the GCPD. It's unknown who built the shrine. The shrine was also one of the Riddler's riddles. Scanning it unlocked a Gotham City Story which revealed that Grundy was captured and ensnared within a Wayne Tech container. An overworked morgue attendant noticed a sound coming from the container and found Grundy. It is implied that Grundy killed him.

Grundy was initially a violent, primitive beast with little capacity for thought or foreknowledge and would act on any feral instinct that came into his mind. The repeated experimentation of the Lazarus Pit on Grundy by Ra's al Ghul and the League of Assassins seems to have all but destroyed his sanity and he is barbaric to the point of sheer animalism, where he can barely speak in full sentences, merely choppy ones. Now, he is basically Penguin's pet who also acts as his enforcer, killing any henchman that Cobblepot sends his way but is obviously not by any means loyal to him. Grundy's own savage impulse was what caused his defeat while fighting Batman, as he accidentally destroyed the very thing that was keeping him alive (or technically undead).

Grundy was fought in three stages. All three stages required blowing up the output generators of the machine that fed him electricity, by using the Explosive Gel. During the first stage, Grundy attacked by trying to smash Batman into the ground or by swinging his shackles around in circles. During the second stage, he would also throw the balls at the end of his chains at Batman as if they were meteor hammers and released maggots from his body as well. During the final stage, Grundy was attached to the electric generator to remain alive and attacked by smashing the ball into the ground to release expanding electric pulses and released electrified maggots from his body. After destroying all three generators in each stage, Batman performed a beatdown on Grundy and a special move that took out his heart.

Grundy, rampaging undead zombie, started on crimes that may have been too much for him since he came back in Slaughter Swamp. Although, Grundy's rampage was put at risk in danger that time with more which the undead that he knew that he was born on a Monday. Grundy always gathered strength to his rampages in which he never died. 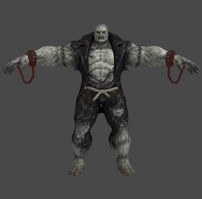 Solomon Grundy and the Penguin Poster 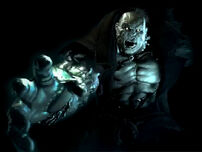 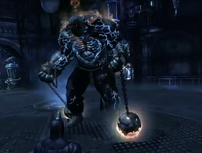 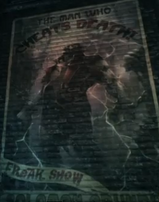 Solomon Grundy Poster in the Subway in Arkham City

Calander Man and Solomon Grundy as they appear in the Batman: Arkham Knight prequel comics