Batman: Arkham Asylum (Summer 2009)
Quincy Sharp has long been hiding a secret. Doctors had previously diagnosed him with a schizophrenic personality disorder, but he chose to ignore it. How could someone of his importance be ill like the dogs in his asylum? On taking over the administration of Arkham Asylum, Sharp became obsessed with the hidden writings of Amadeus Arkham. As he read more of these memoirs, he became almost two people; one dedicated to curing Gotham City, the other desiring only to eradicate the evil of insanity from Arkham. In his demented state, he has stalked and killed patients, his ultimate goal being to kill the Joker. It is possible the rational side of his personality is not even aware of this dark, destructive force within him.

Long before the events of Arkham Asylum, Quincy Sharp created the Spirit of Arkham.

After he found all of the secret tablets, Batman made his way back to the hiding place of Sharp, where a final message was written, with "Batman" etched all around it. Sharp detailed in it that he was the Spirit of Arkham and begged Batman to continue his work.

The Chronicles of Arkham

Deciphered Message # 1
I am the spirit of Amadeus Arkham. Through my actions, I have saved this cursed city, though my own curse is to forever remain in the shadows. My story is carved into the very soul of Arkham and will only be revealed to those dedicated enough to discover it.

Deciphered Message # 2
My family's blood ran through the heart of Gotham. We were doctors, politicians and teachers; we have been the organ cleaning the arterial filth from the city. We have been its servants giving all to protect it. And still it has chosen to hurt us.

Deciphered Message # 3
As Gotham's veins slowly filled with pain and suffering, the effects were felt everywhere. My father fell first, infected by some foul disease; my mother lived on, but only in a dream. I returned to the family home to care for her where she remained in her bed for as long as her body continued to breathe. Her tears kept me awake at night.

Deciphered Message # 4
My journey lasted little over a month. Visiting academics in both Metropolis and Keystone, I was exposed to a wealth of new ideas. I began my day returning home in good spirits, eager to see my wife and family. I ended it kneeling in their blood, broken fragments of my life pouring through dripping red fingers.

Deciphered Message # 5
I returned to my work, but I could not shake the pictures from my mind. I should have been repulsed, but I was more eager than ever to find an explanation for why someone would do this.

Deciphered Message # 6
They brought the animal before me, shameless and barking like a mad dog. For what felt like days I endured his boasts. He took pleasure recounting his actions, cataloging his depraved crimes. What should have been revenge turned to pity. This poor dog needed my help.

Deciphered Message # 7
The island changed little over the years. Its reputation was in tatters, but I vowed to fix it. As the buildings were rebuilt I saw the future, a bright wonderful future.

Deciphered Message # 8
New brick, metal and paint covered old wounds. Fresh blood was injected into the body. Bright new minds came and all swore to uphold our promises. We all knew we were the ones to fix this city. And the city would thank us.

Deciphered Message # 9
My family's killer stood in front of me. Years of therapy have deemed him sane. I was proud to see him walk free. In exchange for his liberty the state required only a signature. He talked about wanting to walk in a park, how he longed to feel fresh air on his face, and then he took my father's fountain pen and killed my secretary. As he was subdued, he screamed out, pleading for forgiveness, for pity, but I had none. I watched as guards beat him to a stain on the floor.

Deciphered Message # 10
Spring was a turning point, a new beginning, a glorious realization of my true destiny. My family's killer perished in an unfortunate accident. These animals cannot be cured. Like dogs, they only respond to discipline. And if that fails, then I was afraid that these accidents would have to continue.

Deciphered Message # 11
I took a walk around my island. I passed by the penitentiary and felt nauseous at the thought of the filth it contained. I looked out over the Gotham Bay and in the distance I saw lights, no doubt boats bringing more filthy degenerates to my city. I swore again to protect her from this darkness.

Deciphered Message # 12
I argued with the latest group of young, eager doctors. They bored me with theories and ideas, proving that they had no theories on how to cure these animals. Only one shared my vision. I offered her the chance to explore her dreams. She accepted. We'll make a good team.

Deciphered Message # 13
The Gotham police dragged a new patient to the island. They said he was responsible for the disappearance of hundreds of the city's vagrants. As I looked at his disgusting body, all scales and teeth, my mind ran free, dreaming of delicious punishments to break this monster. Doctors gathered around, poking it, examining, but only I knew what would cure him once and for all.

Deciphered Message # 14
The beast was too strong. His animal savagery nearly cost me my life. I took my frustrations out on a lone patient. His case notes suggested he was a paranoid schizophrenic. His pleas as I beat him to death suggested much more. His confessions were illuminating. My path was clear.

Deciphered Message # 15
Every day I found the patients more distracting. Their insane mutterings and constant twitching disgusted me. There was only one way to cure this evil, only one way to purify the city and ensure its future. I needed to prepare myself. I needed to be ready.

Deciphered Message # 16
I had a sudden pang of conscience. I sought counsel from my priest on the choices I had made. I asked him if it was a sin to kill in order to save a life. The holy man said all life was sacred, but a judgment would not be upon my soul if I acted to save another. I left the confessional with my soul uplifted, convinced more than ever I am doing a service not only to mankind, but to God as well.

Deciphered Message # 17
I watched in silence as he brought in the woman. Her skin now a venomous green, the wanton creature no longer looked like a human being, much less a woman. The Bible says, "Suffer not a witch to live," yet he has once again delivered this female atrocity to our care. Once I have dealt with the monster, I think it will be time to see if green wood does, in fact, burn.

Deciphered Message # 18
Sitting in the darkness outside of |his cell, I watched the crazed twitching, listened to the disgusting words that came out from his mouth. How can I let a dirty animal live? He is the cancer I have sworn to protect the city from.

Deciphered Message # 19
Curse me for a fool. How could I not see it until now? The monster had a confederate! I hid in the darkness near his cell and saw with my own eyes one of the doctors whispering to him. She looked at him trough the transparent barrier with tenderness, with, dare I say, desire. My skin crawled with revulsion as she kissed the glass. Fighting the urge to dash the woman's head through the glass, I let her continue; the damnable clown might have shared secrets with her that would be useful once the mad dog has been executed. I'm sure the woman will reveal what she knows to me. If not willingly, then certainly under electronic persuasion. After that, a lobotomy, I think. Unfortunate for one so young, but her lust has put the reputation of Arkham at stake. Yes. A lobotomy, the very thing. There is no other way to ensure her silence in this regrettable matter.

Deciphered Message # 20
Yet again I found myself watching him. No one can provide a cure. He laughs in the face of those who try. Amadeus would not have let him live and neither should I. One last sip of cognac and I was ready.

Deciphered Message # 21
He watched as I entered the cell. He smiled as I showed him the knife. I told him how I will use it. How I will cleanse this city. And then terror. I was paralyzed. I struggled. I screamed, but I was silent. The monster looked at me, expressionless. He ran my blade slowly across my forehead; a smile cracked across his horrible porcelain face and I heard the filth fall from his mouth. He laughed and called me that horrible name.

Deciphered Message # 22
It must have been Crane, another one who doesn't deserve to live. Why do these people thrive on chaos? Joker in particular desired anarchy and, since his escape, will no doubt wreak it upon my city. I feel this is the end for my diary. Joker will be recaptured, my story will be told. I am not afraid. If Arkham becomes my cell, then I will know I did my best. I will be remembered.

Deciphered Message # 23
I am the spirit of Amadeus Arkham. Even though Amadeus had long since passed, his spirit lived on, surviving, moving through the walls of his asylum. When it chose me, I felt proud. I was honored to continue his work. To cleanse this city. If you are strong-willed enough to follow my tales, you are strong-minded enough to deduce my identity. Come and find me, friend. Together, we will save Gotham.

Deciphered Message # 24
My name is Quincy Sharp, the spirit of Amadeus Arkham. You have done well to decipher my story and I pray it has helped on your path. I trust that through my writings you will do what is right. Please. I implore you, continue my work. This city deserves a savior; continue my work! 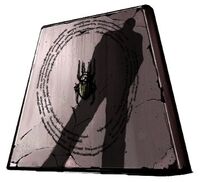