The Subway is a train station that is located under Arkham City, in the Bowery.

8 years earlier, the train station can be seen in the same location in Jezebel Center, but is closed.

During his journey to find Mr. Freeze to make a cure for a deadly disease that most of Gotham, Joker, and himself are infected with, Batman needs to break into Penguin's headquarters, the Museum. But it is locked down and Batman is unable to hack his way in due to three communication jammers that are scattered around Arkham City.

After destroying the first two, he goes for the last one which is located in the underground train station, the Subway. After fighting five of Penguin's Henchmen, he destroys the final jammer and continues on his journey.

Batman by the entrance to the Subway in Arkham City. 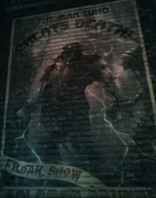 Retrieved from "https://arkhamcity.fandom.com/wiki/Subway?oldid=82825"
Community content is available under CC-BY-SA unless otherwise noted.