The Suicide Squad (also known as Task Force X) is a corrupt government-funded organization which is composed of an anti-hero team of incarcerated supervillains who act as deniable assets for the United States government, undertaking high-risk black ops missions in exchange for commuted prison sentences. The group operates out of Belle Reve Penitentiary, under the directorship of Amanda Waller. As insurance against them potentially rebelling, she also equipped them with a tracker in their necks that acted as a powerful nano-explosive with enough destructive capability to decapitate them. Waller also implied that, besides them running away, getting captured, or disobeying a direct order, she also can potentially set them off if they even gave an answer far too slowly for her tastes regardless of whether it's the correct answer. In the Arkham Knight comics a new version called the All-New Suicide Squad under the Leadership of Harley Quinn has no connections with Amanda Waller's Suicide Squad.

After the Joker's defeat, Amanda Waller came to Deathstroke to recruit him into the Suicide Squad. When Amanda tossed a sign up list to Deathstroke, he implied that he would rot in Blackgate if he didn't sign or he works for her if he did.

Three and a half months after Batman: Arkham Origins, Amanda Waller arranged for a prison break and sent Catwoman into Blackgate in an attempt to recruit Bane into the Suicide Squad. Waller monitored the actions of Batman, Catwoman and all those who were involved in the breakout that night.

Despite Deadshot and Bronze Tiger being successfully abducted by Captain Rick Flag under Waller's orders, the mission was ultimately a failure as Batman was able to defeat Catwoman and recapture Bane.

Harley Quinn, Deadshot, and Captain Boomerang were brought in, along with new recruits Killer Frost, King Shark, Black Spider and KGBeast. KGBeast thought Waller was bluffing about the bombs, and subsequently lost his life in testing his theory. Their mission was to retrieve a thumbdrive in the Riddler's cane, which contained all info on the group. The group was sent to the Iceberg Lounge, where Cobblepot provided armaments and a place to stay the night, along with the arrangements to get into "the crazy farm". Waller called Frost in secret, telling her the true mission was to kill Riddler.

The Squad managed to get into Arkham, albeit putting the place on Yellow Alert. They played Thursday's security footage to keep Waller and Batman off their backs; however, though Waller was fooled for some time, Batman knew who didn't work on Fridays. This lead to a fight in the confiscated property room, where Batman used the confusion to switch costumes with Black Spider; Frost took advantage of this to find Riddler.

Catching Frost, who was convinced by Riddler to let him diffuse the nano-bombs, the Squad decided to spare him. Waller soon discovered what they were doing, activating the bombs; however, only King Shark and Black Spider perished. The rest of the squad survived thanks to the electroshock machine zapping the bombs.

GCPD arrived to take control of the Asylum, but Joker escaped during the chaos, releasing every last patient from captivity. This caused enough chaos to make the rest of the group disband and go their seperate ways, with Deadshot succeeding in escaping, while Harley and Boomerang were captured. Frost was in an exploding car thrown by a rampaging Bane, although it is unclear whether she was killed or not.

Free of Amanda Waller and their explosive collars, Harley Quinn, at the direction of her new partner, Penguin, reformed the Suicide Squad. This new squad would consist of Quinn, Deadshot, Captain Boomerang and Killer Croc, though they had to free Croc from GCPD custody first. They were hired by Penguin to murder Bruce Wayne, who was leading the efforts to renovate the old Arkham City. After staking out Wayne's movements for nine hours, they attacked his car, thinking to pluck the billionaire out of it once it was disabled, however, when the window rolled down, they met Batman instead. 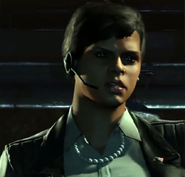 The Suicide Squad in Batman: Assault on Arkham