Superman is a fictional superhero in the DC Universe. Though he never made a physical appearance in the Arkham games, he is referenced in the game Batman: Arkham Knight via commentary made by various thugs.

In the prequel novel Riddler's Gambit, set 5 months before the events of Arkham Knight, Robin makes a slight reference to the superhero via a memory that he has, while Harley Quinn compares Vicki Vale unfavorably to Lois Lane.

He is set to appear as a potential antagonist in the upcoming game Suicide Squad: Kill the Justice League, which takes place in the Arkhamverse.

Reference to Superman in Arkham Knight

"You think the Bat is tough to kill? You don’t want to go up against the other guy in the cape."

"That'll teach him (Batman). Who the hell does he think he is anyway, Superman?"

"You know the only thing that's missing is if that freak from Metropolis flew in here."

"So Bruce Wayne, huh? Never would've guessed. Next thing you know someone's gonna tell me Superman's really a janitor. Or no, a journalist."

Reference to Superman and Lois Lane in Arkham Knight: The Riddler's Gambit

They reminded him of some robots he’d seen in an old Superman cartoon.

“I can kill this Lois Lane wannabe just as dead with a stick as I can with an axe.” 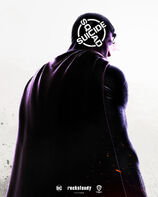