Start a Wiki
Project TN-1 was a super-soldier serum program that was founded, researched upon, & lead by Bane himself. It was originally designed to create a far much more advanced version of the Venom Super-Soldier Serum used by Bane and several of his men in Batman: Arkham Origins. It caused extreme changes to physiology and musculature far beyond the range of normal Venom or Titan. The full potency of the drug would take effect in 10 minutes, and left a small window of vulnerability. The TN-1 also caused severe memory loss. It seemed to be a predecessor compound to Titan.

Several of Bane's men in Gotham City used TN-1, to increase their muscles, strength, adrenaline, rage, tolerance, durability, stamina & metabolism, with Bane himself proposing to use it as an attempt to cure himself of his addiction to Venom and give him a permanent transformation into a true super-soldier. Also, according to Batman, Bane was aware of the memory loss and intellectual degeneration side effects as he was trying to find a way to avoid or remove these side effects. Bane finally (albeit reluctantly due to the side effects) injected himself with the serum in his final battle with Batman, grew to gargantuan proportions, and gained Meta-human strength, durability, stamina, adrenaline, aggression and metabolism, but also suffered memory loss, and lost his knowledge of Batman's true identity in the process.

The TN-1 in Bane's blood, coupled with his Venom and Poison Ivy's Plants, was used by Dr. Penelope Young in the creation of her Titan serum. Like the TN-1, Titan could turn any user into a Bane-like monster, including grotesque facial and muscular disfigurement; however, only a small amount was needed to trigger a long lasting transformation. The treatment had a price, as the sudden release of endorphin and adrenaline, along with the extreme pain of the transformation, caused the recipient to go into a crazed, and psychotic state. Only Bane (due to his extreme intelligence and will, and his previous usage of Venom and the TN-1), Poison Ivy (due to her natural immunity to toxins), and the Joker (because of his high intelligence and his psychopathy) retained their personalities (at least, partially) and some of their intelligence.

Bane (while still under the influence of the Titan Formula) appeared notably more intelligent than his appearance in Arkham Asylum as he not only spoke in full sentences, but he was also much calmer and cunning in nature as demonstrated in his attempt to manipulate Batman (albeit unsuccessfully) in order to achieve his own goals. Bane's intelligence, however, was still a far cry from what it once was, as it seemed to be affected by his emotional state and the anxiety produced by his addiction to the drug, as he was unaware that Batman knew that he was going to try and keep the Titan for himself and used him to gather the rest for him. It eventually reached the point where lowly henchmen were able to manipulate Bane with the false hint of locations of Titan due to his emotional instability and addiction.

Bane injecting the TN-1 into himself 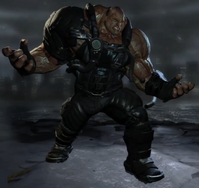