TYGER was a private military contractor/security company that was hired by Hugo Strange and Mayor Quincy Sharp to act as the security detail of Arkham City. Considered by some to be the best private security company in the world, the TYGER operatives were a combination of ex-military and former SWAT operatives that were well-trained, well-equipped, highly recommended. Unknown to the general public, the company and its agents had all been brainwashed by Strange to act as his personal army of unquestioning soldiers.

After the events of The Joker's takeover of Arkham Asylum and Sharp's election as Mayor of Gotham City, TYGER was hired by Sharp and, secretly, Strange, to supervise the construction of Arkham City and act as its security force. They also bought Arkham Island (and what remained of Arkham Asylum) when it was being sold to the highest bidder. Strange had TYGER turn Arkham Island into a base for their fleet of Air TYGER Helicopters that Strange's security used to observe the city's inmates and played an important role in Strange's Protocol 10.

During the events of Arkham City's development, TYGER also encountered Batman and were specifically trained to deal with him, but they ended up ambushed by Catwoman when they had Batman at their mercy. Afterwards, Batman interrogated the captain of the squad that ambushed him and learned that Strange was the one who hired them. Shortly afterwards, Strange had the same captain interrogated by electrical shocks and truth serums to find out how Batman did. He did so and died as a result of the torture.

TYGER later stormed a protest rally that was held by Bruce Wayne outside of Arkham City with specific orders from Strange to capture Wayne, whom he secretly knew was the true identity of Batman, as well as Jack Ryder, who failed to escape from TYGER when they stormed the protest. When Bruce attempted to escape from his isolation cell, a TYGER Guard heard his attempt to free himself from the ropes of his chair and burst in to try and suppress him, but was knocked out by him. Another TYGER operative forced Wayne out to the check-in area to Line A, although not before Wayne secretly stole an encryption key for tracing the TYGER communications systems so he could hack in and eavesdrop on their transmissions at a later time as Batman.

Another TYGER operative, when attempting to quell a prison riot nearby, also shot one of the prisoners. They then inserted Wayne, Ryder, and a prisoner into Arkham City. A squadron of TYGER Helicopters was patrolling near the Solomon Wayne Courthouse, with AIR TYGER 4 reporting that Catwoman was being held prisoner by Two-Face at the Courthouse, a transmission that Bruce Wayne, donning his Batman gear after Alfred arranged for the Batsuit to be air inserted into Arkham City upon Wayne's request, was intercepted. They also were told by Strange not to assist Catwoman, as Strange wanted to let Two-Face to "have his fun." AIR TYGER 3 also ended up spotting Batman, but Strange gave orders to have them monitor Batman, but not engage him as they had something special planned for him.

After Protocol 10 was enacted, the AIR TYGER Helicopters performed an aerial raid throughout Arkham City, and heavily damaged the Steel Mill, the Courthouse, and Museum while the main ground forces were to round up all the Political Prisoners and execute them, as well as guard the TYGER Confiscated Goods Vault. Catwoman managed to succeed in breaking into the Vault, although she was forced to leave behind her briefcases to rescue Batman. Afterwards, Batman managed to track down the AIR TYGER Helicopter that contained the Master Control Codes to access TYGER's main headquarters: the Arkham City Processing Center in the Bowery. Batman rescued the Political Prisoners, beat up the reinforcements, and infiltrated Wonder Tower Foundations, the Observation Deck, and the Security Control Center. After Strange's death and Wonder Tower's destruction, TYGER called off the attack and were presumably held under investigation by the GCPD for their involvement in Strange's criminal activities.

After the Joker's riot on the old asylum, Quincy Sharp gave Hugo Strange his promise to form his TYGER force and begin work on Arkham City.

During the same day as the announcement of Arkham City, Hugo Strange began to send TYGER guards to arrest criminals in Gotham City. TYGER guards populated the old Arkham Mansion while operating in Gotham, the former headquarters for Arkham City.

Four TYGER operatives broke into Selina Kyle's home. They searched the house and were attacked by Selina's criminal alter ego. After Selina fled the house, they were seen stealing jewelry from one of her safes.

Batman, after knocking out Catwoman at the scene, spoke with James Gordon about TYGER's actions. He then broke into the Arkham Mansion, to find blueprints that would help Catwoman find her stolen jewels. During the same time, Catwoman also broke in, as well as Harvey Dent with his thugs, who shot their way through. From another location, TYGER guards were sent to the mansion to assist the mansion and apprehend Dent. They arrived in front of the building and entered with a battering ram, and were instantly gunned down by Harvey's henchmen.

Before Arkham City, Strange sent the TYGER Guards across Gotham to search for Batman to fight him and slowly, after many attempts, learn his weaknesses. After being beaten by Batman, at least one of the guards ended up subject to an intense torture session by Dr. Strange as an informal "debriefing" regarding Batman's actions, resulting in the guard's death.

It was heavily implied that strong, powerful-looking criminals were personally selected by Strange and became the TYGER Guards through medication.

After Arkham City, the TYGER Guards were rounded up and were either imprisoned or killed.

The TYGER Guards appeared as a part of the Mad Hatter's illusion.

Model of the TYGER helicopter 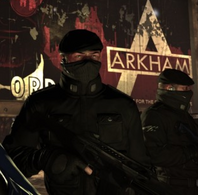 Propaganda defaced by the Joker

A TYGER guard stalking Batman in the trailer 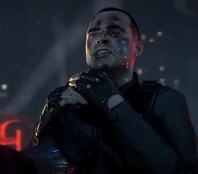 A guard being interrogated by Batman