A master of hand-to-hand combat and swordplay, Talia had dueled with Batman on several occasions and considered him an honorable opponent.

Despite Batman's elusiveness, her attraction to him had only increased - an attraction that her father encouraged in his mad quest for a male heir.

Talia knew that one day she may be forced to choose between her father and her Beloved.

Talia first met Batman when he saved her from an attack in Lady Shiva's palace, but in the process he was stabbed with a poison dagger. Talia took Batman, nursed him back to health, and had to unmask him to tend to his wound. She introduced him to her father, who wanted to form an alliance with him. Bruce and Talia developed a relationship, but Batman discovered Ra's al Ghül's murderous goals.

Five years later, and a year before the events of Arkham City, Batman and Talia encountered each other in Metropolis which ended with them spending the night together. Talia herself appeared to remember that night fondly and it was implied that was the beginning of their love-hate relationship.

Batman revealed that his feelings for Talia had not changed, but neither did his view of Ra's. Talia offered to let Batman slay her father and take his place, but he refused. Talia returned to Ra's who revealed that he had scheduled a meeting with Hugo Strange.

Talia appeared in Wonder City and saved Batman from her elite guard. Talia tried to convince Bruce to join her cause and began to kiss him until she saw the damage the Titan disease had done to his face.
Batman told Talia that he wished to become an assassin, and waved off her suspicion by using his illness as his reason for that sudden and desperate change of heart. Talia lead him to the first "Trial of the Demon", and after Batman succeeded, she took him to see Ra's. When Ra's told Batman to take his rightful place as the Demon by killing him, Batman revealed that he only needed his blood, after which Talia became angry at Bruce's lie, though she still urged him to take his place as the Head of the Demon.

After Ra's al Ghul was defeated, he held Talia hostage to make the Dark Knight kill him, but that backfired when Batman managed to disarm him with a Reverse Remote Control Batarang and Talia fled the room, angered that she had been betrayed by both Batman and her own father. Despite Bruce's betrayal, she kept an eye on her Beloved. Talia later stole the Titan cure back from Harley Quinn for Batman and tied and gagged her to a pole in the Assembly Line at the Steel Mill.

Talia later appeared at the Steel Mill Funhouse, saved Batman from Joker, offered the clown "the gift of immortality," and gave him the position that she had previously offered Batman. As she left, Talia showed Batman that she had activated the tracker that he had used to find her in Wonder City.

When Batman escaped the Steel Mill, his immediate goal was to save Talia from the Joker rather than stop Protocol 10 and Hugo Strange. Oracle and Alfred both defied Batman's wishes, and stated that he couldn't let one thousand lives die for the sake of one.

Though Batman agreed to stop Strange, he had Barbara keep a lock on Talia's signal. After Protocol 10 was stopped, the Joker broadcasted that he was holding Talia hostage at the Monarch Theatre. When Batman arrived, he tried to convince the Joker to let Talia go free which distracted him long enough for Talia to kill him with her sword, and her explaining that the only way to end his reign of terror was to kill him.

When Talia presented the cure to Batman, he realized that there were two Jokers the whole time, and Talia was shot and killed by the real Clown Prince of Crime from the theatre balcony. Talia apologized to Batman for her mistake before she died in his arms, and dropped the cure for Clayface (who had been masquerading as the Joker) to take. Batman used Talia's sword to defeat Clayface in the final battle, drank half of the cure and then again used Talia's sword to destroy the machinery around the Lazarus Pit, which prevented Joker from reaching immortality.

After the explosion of the pit, Joker demanded the cure from Batman, arrogantly and tauntingly stating that even though he killed Talia, poisoned Gotham with his poisonous blood, and has committed countless other murderous acts, Batman will still save him. Batman voices his hatred of the Joker and contemplates whether he should give the cure to the clown or let him die which he deserves. Although Batman did eventually decide to save Joker, he was too late as at the same time, Joker attacked Batman with a knife in an attempt to retrieve the cure from the Dark Knight, causing Batman to accidentally drop the cure on the ground and destroy it. After Batman reveals that he would have saved him, Joker laughs at the irony before he succumbed to his fatal disease and died as his nemesis watched on.

Talia, along with the many other countless victims of the Joker, received justice when the Clown Prince of Crime finally died from his disease.

Talia's body was never seen again in the Monarch Theatre after Batman had defeated Clayface and the Joker, and disappeared. It was possible that her body was taken to a Lazarus Pit to be revived by her ninjas, but Batman's guilt over her death and the state of the League of Assassins suggested otherwise. Both Joker's and Talia's deaths sent Bruce into a deep depression.

Talia's sword was stored in the GCPD Lockup Evidence Room. When Batman approached it, he touched the glass and said her name before he apologized to her which showed that he still blamed himself for her death.

During the Riddler's Revenge sidequest, Talia was frequently mentioned by the Joker's hallucination, showing that Bruce still hadn't got over her death and felt guilty for having feelings for Catwoman.

Talia did not appear in the Season of Infamy mission Shadow War, presumably because she still hasn't been revived. It is revealed that following the deaths of Talia and Ra's during the events of Arkham City, their bodies have been taken away by the League of Assassins in order to revive them. Due to the lack of a Lazarus Pit, Ra's has been on a life-support system, which left him in a zombified state, barely managing to say three words. Following the wishes of some members of the League that a new Head of the Demon be installed in Ra's place, a civil war broke out between the assassins that are loyal to Ra's (Loyalists) and those that oppose him (Rebels), led by Ra's' other daughter and Talia's sister Nyssa Raatko, who blames their father for indirectly causing Talia's death.

If Batman were to revive Ra's, leading to Nyssa's death, a dying Nyssa would call out Batman's stubborn nature, emphasizing that it was this nature which was the reason why Talia had fallen in love with him at all.

Following the completion of the mission, which either results in the death of Nyssa at the hands of a revived Ra's or in the destruction of the Ra's al Ghül's life-support system and his essential natural death, Batman found an audio recording of Ra's addressed to Talia. During this tape, it's revealed that he was planning to give Talia control of the league (and if necessary, she would be revived) if Batman refused the role.

Also, Talia's cryogenic chamber in the morgue of the Elliot Memorial Hospital which had her nametag on, was empty, hinting that she may be alive.

A highly trained and very intelligent young woman, Talia al Ghül, the eldest daughter of Ra's al Ghül and the second-in-command of the League of Assassins, was considered by many to be the deadliest female assassin in the world. Despite that, or perhaps, because of it, Talia could be extremely arrogant, to the point where she sometimes do not pay attention to details or underestimated her opponent's own intelligence, as she did with the Joker.

Before she met Bruce, Talia was almost completely obsessed with achieving her father's dream of cleansing the world and showed little to no interest in anything beyond their plans. A fact which would both greatly please and irritate Ra's over the years who desired to have a male heir to run the League after he was dead. After she met Bruce for the first time, however, Talia began to admire him almost immediately, and believed that he would make a valuable ally. Over time, that admiration eventually turned to infatuation. Though their relationship seemingly ended after Bruce couldn't accept her father's plans, Talia continued to have feelings for him.

Talia's feelings for Bruce were so great that she was willing to go against the League and her own father in Arkham City to save him. She was even willing to give the Joker unlimited power in exchange for him sparing her Beloved. Although, she later stabbed Joker in the back literally, which indicated that it may have been a trick. While Talia did not necessarily agree with her father on all of his views and was not as fanatical about killing all criminals, she nonetheless, fully believed that certain exceptions could and should be made and was constantly frustrated that her Beloved did not realize that.

In regards to her father, Talia greatly respected and loved Ra's to the point where she was willing to do anything to please him. However, as the repeated resurrections from the Lazarus Pits began to take their toll on his sanity, Ra's became increasingly abusive toward his daughter to the point where Talia began to hate and fear him and by Arkham City, any remaining positive feelings Talia had toward him all but vanished after he tried to use her own life as bargaining chip to force Bruce to kill him and take his place.

Talia had tan skin, brown hair, and green eyes. She wore a black, long sleeved leather jacket that was cropped to show her belly, and also wore a belly shirt underneath it. Her midriff was exposed, and she had an innie belly button, adorned with a belly button piercing. She also wore black skin tight pants, black gloves, and a pair of black boots. 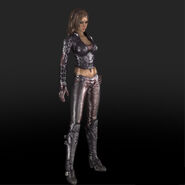 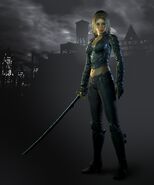 Talia dying in Batman's arms at the Monarch Theatre 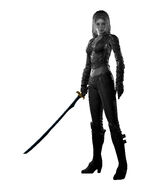 Talia's empty cryogenic chamber at the morgue in Arkham Knight