TITAN is a chemical solution created by Dr. Penelope Young and used by the Joker via research on the chemical compound, Venom, and Poison Ivy's plants. Like Venom, TITAN can turn any user into a Bane-like monster, also known as a Titan. However, only a small amount is needed to trigger a long lasting transformation.

TITAN was originally conceived by Dr. Penelope Young as a way for weaker patients to survive more strenuous treatments. Additionally, it's believed that Scarecrow had aided in its creation. However, Young's source of funds Jack White, who was in reality the Joker, intended to use the compound to create an "army of a thousand Banes".

Bane was secretly brought to Arkham Asylum from Blackgate Prison (arranged by the Joker). Joker's plan was to have Dr. Young study him and the effects of Venom on the human body, so that she could develop TITAN, a potent serum consisting of Venom and Toxins from Poison Ivy's plants. When discussing the TITAN Project in public, Bane's involvement was kept secret, and he was referred to only as "Patient X". Officially, Bane was listed as an escapee from Blackgate to cover-up his transfer (Batman and the GCPD were led to believe that he had escaped from Blackgate). During that time, Bane was forced against his will to be a human guinea pig for the TITAN Project.

One of their first test subjects was Katie Burke, the daughter of millionaire Edward Burke. She was diagnosed with a deadly disease, and her father started looking for a cure. He found a doctor that offered her help, Dr. Harleen Quinzel. She introduced Edward to a friend of hers, Jack White (Joker). As Joker persuaded Edward to build an amusement park on an oil rig, Harley pretended to do tests, and claimed that the only way that Katie could be cured was through the use of TITAN, the experimental drug. Ready to try anything to cure his daughter, Edward agreed with the decision. As expected, Katie died painfully, which drove her father to commit suicide, and allowed Joker to take control of the amusement park.

While Dr. Young discovered the true identity of her benefactor and attempted to kill the project, research had already progressed into the production phase. Intent on obtaining the formula, Joker formulated the Arkham Asylum Incident partially to obtain the TITAN and create his "monster army". Joker succeeded in using the formula on six of his henchmen and two Arkham Guards, which transformed them into Bane-like creatures as well as on Poison Ivy, which enhanced her powers and nearly destroyed Arkham Island with killer plants, and finally himself. Joker also used TITAN on Bane against his will to have him fight against Batman and to test out the TITAN's effects.

It was revealed by Poison Ivy that there was a counter-compound/antidote to TITAN, which originated from unique plant spores that were found in Killer Croc's Lair. Batman was able to obtain some spores and liquefied them to make an antidote. Unfortunately, Ivy's plants destroyed the Bat-Computer that was mass-producing the antidote. Luckily enough, the TITAN eventually wore off on its own, and returned the affected individuals to normal, including the Joker, who used it on himself as a last resort to kill Batman. Though the original TITAN compound and TITAN formula was destroyed, one crate that contained mass produced Titan was left floating in the water.

Following the Incident at Arkham Asylum, it was revealed that the TITAN mixture made its way into the Gotham City underground. Crates of the compound floated into the docks and Two-Face bought it hoping for quick cash. Little did Two-Face realize the mistake of having Brother-Sister team Terry and Tracy Trask take the TITAN into his cellar. Upon discovering what it was, the siblings started using it and turned the cellar into a personal training ground.

After slaughtering Two-Face's gang and putting the man himself into several casts, T&T started making plans to take over the city under the employment of Hugo Strange. Unfortunately for them, Batman arrived in time to save the city, but before he could trace T&T back to Hugo Strange, they committed suicide via high explosives that were planted inside their bodies, which killed hundreds and blew up Gotham City Hall.

The purpose of the entire incident was later revealed to act as a trigger to give Mayor Quincy Sharp the excuse that he needed to create Arkham City.

Additionally, the Joker was still suffering from the side-effects of his TITAN overdose, which mixed with the toxins in his blood and mutated into a extremely toxic poison with an estimated six months to live. Joker was planning to use the TITAN again after he had a doctor, which he promptly sent into the incinerator, isolate the TITAN from his blood. In addition, the Joker had some of the TITAN formula that was isolated from his blood injected into one of his henchmen, and then sent him after Bane.

After the henchman had managed to place Bane at his mercy, he started to suffer from cardiac arrest, which resulted in Bane having to mercy kill him. Due to that experience, Bane also vowed to destroy the source of all TITAN by any means necessary. This led Bane to Penguin's latest gang initiation where he demanded that Penguin hand over all of his TITAN immediately.

While Bane was able to defeat Penguin's TITAN Henchman, he was forced to retreat by Solomon Grundy.

After his encounter with the TITAN-infused thug, Bane launched a crusade against the existence of the TITAN drug, and devoted himself to the eradication of the compound. However, Bane soon decided that it was best to use the TITAN to enhance his own strength instead. Realizing that he couldn't do it alone, Bane signaled Batman with a flare and lured him into the abandoned Krank Co. Toy Factory at Amusement Mile in the flooded section of Arkham City. There, Bane alerted Batman to the twelve TITAN containers remaining within Arkham City.

Bane gave Batman six containers in southern Arkham City, while he would take the six in the northern area.

The locations of the six that Batman had to destroy were:

Even though the containers' locations were marked on the map, Batman could see their specific location from a distance using Detective Mode. In order to destroy them, Batman sprayed the container with Explosive Gel. Once Batman had destroyed all six, he returned to Krank co. Toys. Depending on whether Batman returned before or after Protocol 10, either TYGER personnel or Joker's men would burst in and demand the containers be handed over. After they had been defeated, Batman soon learns that Bane hadn't destroyed his six and wanted the Titan all to himself and then tried to kill Batman, the Dark Knight however quickly trapped him in a room using a Batarang. Bane's containers, that had been grouped together inside Krank Toys, were then blown up by Batman too.

Meanwhile, the Joker, dying from his previous exposure to the TITAN compound during the Arkham Asylum Incident, used his infected blood to poison stores of medical blood across Gotham, infected Batman himself, and used this as a bargaining chip to force Batman to find a cure for the poison before it killed them both as well as the infected Gotham citizens. Batman contacted Mister Freeze for research into a cure, and Freeze revealed that he had made an unstable formula that could theoretically work.

Noting that all the formula needed was a specific enzyme that could be found in the blood of Ra's al Ghul (due to his constant usage of the Lazarus Pit), Batman managed to locate the League of Assassins' stronghold underneath Arkham City in Wonder City, and obtained a sample of Ra's blood. Returning the sample to Freeze, Harley Quinn managed to steal the developed cure as Freeze was attempting to use it as a bargaining chip to force Batman to find his wife, Nora.

The cure was in turn stolen from Harley by Talia al Ghul, which prompted Joker to kill her for it, and the cure then wound up in the hands of Clayface. When Batman defeated Clayface and took the cure, he managed to cure himself just before Joker, who believed that Batman would never give him the cure, stabbed him in the arm in an attempt to get at it. This prompted Batman to drop the vial, where it smashed on the floor.

Unable to cure himself, and laughing at the irony that Batman would have given him the cure had he not attempted to steal it, the Joker succumbed to his TITAN poisoning, and died. Batman apparently missed some of the TITAN, as Harley Quinn used it on one of her thugs two weeks after Batman and Bane's alliance.

Between Arkham City and Arkham Knight

Though cured of the fatal condition the TITAN-infected blood had caused, Batman could sense that something was still up the now-deceased Joker's sleeve. He soon found four transfusion bags of Joker's blood were unaccounted for, which resulted in four people being infected with it. Christina Bell, Johnny Charisma, Albert King, and Henry Adams were detained by Batman and studied. As a result of the infected blood gestating in Bell, King, and Charisma for too long, they were beginning to look and act like Joker, although with only a specific aspect of the late Clown Prince of Crime's personality; Bell had Joker's obsession with Batman, Charisma had Joker's egomania and flamboyancy, and King had Joker's sadism. Only Henry seemed immune to this. Remembering that Joker's blood was still in his own veins, Batman kept a fifth cell for himself ready, just in case he ever succumbed to the influence of the deranged clown's blood.

Batman tested Henry constantly to see what was allowing him to resist Joker's influence; however, he didn't keep his promise that detaining him would only last a few days. By the time Batman brought Gordon in on this experiment, Henry was begging for help in being released; however, Gordon sided with Batman.

In truth, Henry was infected, but was able to hide the effects. He made contact with Harley Quinn prior to Batman incarcerating him, and plotted with her to free the new Jokers, with the hidden intention of killing them to purify the gene pool. Scarecrow's Fear Toxin only accelerated the process in Batman, which caused him to see the Joker talking to him whenever he was facing a trying situation. Dropping the charade, Henry killed Bell, Charisma and King; he held Quinn hostage to force Batman to cooperate. The consciousness of Joker was impressed with this old man, momentarily becoming undecided on either to root for him or Bats. However, when Henry threatened to kill Batman next, Joker sided with his old foe; he then urged Batman to kill Henry, causing Batman's eyes to glow green. Seeing this, Henry judged Batman to be the "best" Joker, and committed suicide as a result.

Batman later was injected with 10 vials of Scarecrow's improved Fear Toxin, which caused the Joker to surface. This began a mental battle between Batman and the Joker, and showing him the only fear that the Clown Prince of Crime had - being forgotten, with only Harley remembering him at all. Confronting the Joker in a version of Arkham Asylum, Batman managed to finally instill the fear in Joker that he never could before, and locked him away in a dark corner of his mind, permanently. 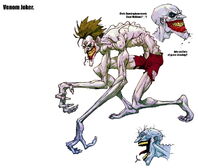 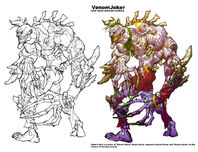 An early concept of a Titan-infected Joker by John Gravato. 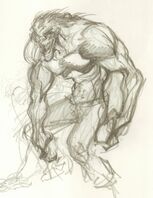 An early sketch of the distortion of a thug by John Gravato. 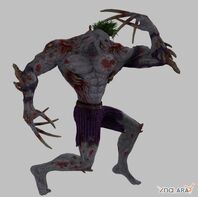 Batman discovering Dr. Young's Notes on the Titan Formula in the Library at the Arkham Mansion