Two-Face led a Gang of inmates from Arkham City. Two-Face eventually won the Arkham Gang War against the Joker and the Penguin. The gang consisted mainly of rapists, muggers, and murderers.

The goons were loyal to their boss and would protect him at a moment's notice, but at times, Two-Face would kill his own men for failure or insubordination.

After the death of the Joker and the defeat of the Penguin, Two-Face was the winner of the Arkham Gang War.

Two-Face formed his own team of inmates to take over Arkham City and eliminate his enemies. Setting his sights on the Solomon Wayne Courthouse in Park Row, Two-Face ousted Calendar Man and made the Courthouse his lair.

Two-Face then caught Catwoman stealing from his personal vault, captured her, and took her to the Courthouse for public execution to show an example that they "meant business." Batman intervened, suspended Two-Face over a vat of acid, and saved Catwoman. Reportedly, Two-Face went underground, his gang scattered, and were captured by Joker's Henchmen who tormented and tortured them.

Eventually, Two-Face's Gang stormed the Bowery and conquered Penguin's territory as well as the Museum. When Two-Face returned after the death of the Joker, he was defeated by Catwoman and left unconscious in the Museum Armory. It was assumed that Two-Face's Gang was taken into custody when the GCPD stormed the mega prison.

One year after the events of Arkham City, Two-Face's Gang teamed up with Penguin's Henchmen and Harley's Gang under Scarecrow's Army. There was a Gotham's Most Wanted Mission called Two-Faced Bandit. In it, Two-Face's Gang tried to rob the banks in Gotham City by using garbage trucks to store cash in disguise. In the first wave, you had to defeat a certain number of Two-Face's Henchmen before the henchmen stole a certain number of cash. An alarm went off and covered any attacks that made sound and drew attention to others. In the second wave, the remaining Two-Face Henchmen abandoned the robbery and tried to kill Batman and there was no alarm at that point. Every bank robbery stopped earned you a WayneTech point, unless if it was the final one, then you earned three. In the final wave, after you defeated Two-Face's Henchmen, things were different. Instead of more of his henchmen, the Militia came in with Two-Face himself for Batman to take out.

In Arkham City, Two-Face's Henchmen were seen wearing masks, black shoes, and inmate overalls (one side clean and the other side damaged). The words "Arkham City" are stitched onto the back of the overalls. A few, however, didn't wear masks.

In Batman: Arkham Knight, the Gang's appearance changed drastically since Arkham City, They sported a Halloween Mask with or without a gas apparatus, and some with or without the mask. The mask looked like a demon with large sharp teeth with half clean and the other half burned. Their clothes, however, sported hoodies, and a vest represented the Hell's Gate Disposal Services logo, which was a skull, but its background depended on the color of the vest. If the vest was yellow, the background was half red and half black. If the vest was orange, the background remained orange on one side, but black on the other half. They had long or short yellow gloves, dark green pants, and fisherman boots.

A Flip Of A Coin Incident

Same as in the Halloween Incident in Arkham Knight, but some of Two-Face's Gang were shown to wear suits like Black Mask's Henchmen from Batman: Arkham Origins, the only exception of his men wearing suits, was that they didn't wear masks that represented their boss.

A concept of one of Two-Face's thugs in Batman: Arkham Knight.

A concept of one of Two-Face's thugs in Batman: Arkham Knight. 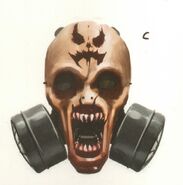 Concept of the gas masks used by Two-Face's thugs in Batman: Arkham Knight.
Add a photo to this gallery

Retrieved from "https://arkhamcity.fandom.com/wiki/Two-Face%27s_Gang?oldid=88939"
Community content is available under CC-BY-SA unless otherwise noted.