Detective Comics #583 (February 1988)
Arnold Wesker was a timid orphan whose deep repression erupted in a barroom brawl, resulting in him being sent to Blackgate Prison. There he encountered the puppet Scarface, and promptly murdered the man who'd carved the puppet.

The two are now inseparable, with Scarface directing a series of criminal activities. While most believe that Wesker is simply acting out a second personality through the puppet, Wesker sees himself as a reluctant lackey who merely does his puppet's bidding.

When he was very young, his parents took him to the Gotham City shipyards to see an albatross. The albatross was something of a local attraction, but Wesker was terrified of it. He yelled at his father, demanding that he take him home. A Spivey's Display Dummies truck screamed down the street striking Arnold's parents, instantly killing them before the young boy's eyes. Wesker was convinced that the albatross was an omen that brought doom to his family. The shock of witnessing his parents' death forced Arnold to repress all emotion. He bottled up his anger and hostility for many years to come. As an adult, Wesker suffered a psychotic break and killed a man during a bar-fight. He was arrested and sent to Blackgate Prison.

The Ventriloquist and Scarface made their marks in the Gotham underworld through the sale and distribution of a designer drug called Fever. Processed in Tijuana, Mexico, they had the drugs smuggled into Gotham City inside of human cadavers. This earned them the attention of Gotham's nocturnal vigilante, the Batman. The Batman raided Rizzo's Funeral Parlor, where the Ventriloquist and Scarface were busy extracting drugs from the remains of a dead gangster. Batman fought through the Ventriloquist's armed men and apprehended the drug lord and his puppet master.

Between Arkham Origins and Assault on Arkham Incident.

After being psychologically evaluated, Arnold Wesker was found to be insane. He was sent to Arkham Asylum along with Scarface.

The Ventriloquist was not present but Scarface is found in a box in the Arkham Storage Facility.

Records show that Arnold Wesker had been released from Arkham Asylum by the time the Joker gained control over it at the very start he flew from Arkham Island. His sub machine gun is found in the asylum's Penitentiary area as a Riddler challenge. Scarface is later seen controlled and then thrown by Joker.

At some point, Harley Quinn befriended Arnold Wesker while in prison, with the two running around in the same circles. According to Harley Quinn, Peyton Riley became the new Ventriloquist and that at some point it was believed Riley met her end at the hands of Batman, but it could not be confirmed. Around this time, Jenna Duffy, a former henchman of Ventriloquist finally attempted to head home to Keystone City to start anew.

Whilst Arnold Wesker was not arrested and put into Arkham City, he is mentioned through the GCPD radio frequency that he has robbed a bank, and have taken two people as hostages, meaning that he has not given up his criminal ways.

Later, he is seen participating in Two-Face's farcical trial against the Joker as a juror where he voted guilty due to Joker forcefully taking Scarface from him. He is seen carrying a Scarface doll with him. His former henchman Jenna Duffy is also present at the trial.

By the time of Scarecrow's attack, Peyton Riley has now been fully accepted as the Ventriloquist. A gun belonging to Riley can be found in the GCPD Evidence Archive.

Base of Operations: Gotham City

HOW DOES HE MAKE THE BILABIAL SOUNDS? IT’S UNCANNY.

Psychological Profile: Wesker is a very special case; previously he was a classic example of avoidant personality disorder, which intensified into a violent outbreak that led to his incarceration at Blackgate Prison. While there, he graduated into a fully realized delusion that his ventriloquist dummy, "Scarface", is an independent personality exerting control over him. It is possible that Wesker is a legitimate example of multiple personality disorder. To probe this further, I've requested that he no longer be separated from his dummy during the treatment sessions.

It can be very difficult to question Wesker due to constant interruptions from "Scarface".

Wesker's delusion has led him to create a complicated backstory for "Scarface", whose personality Wesker seems to have created from poorly written, old-fashioned gangster films. 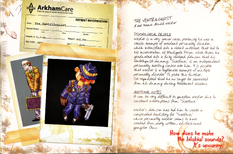