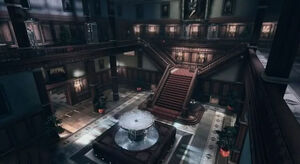 Located in the Crest Hill community in the Bristol Township, Wayne Manor is twelve miles from Gotham City, and stood among hills that were honeycombed with caverns and tunnels that were collectively known as the Catacombs.

It was most famously known as the residence of the Wayne Family. However it also served as a public façade that hid many caverns and tunnels (also the location of the Batcave), that was used by the Waynes throughout the years, and was directly underneath its foundations.

Wayne Manor began as the simple home of railroad financier, Jerome K. Van Derm in 1855. Soon after, Van Derm had to give up the property to the brothers Solomon and Zebediah Wayne in 1858. Solomon, a judge, worked hard to preserve equality in Gotham, and said that the city should be a "fortress against vice and iniquity". Solomon expanded Wayne Manor to its present size, and acted as the first Wayne to turn it into a manor. They later used Wayne Manor as part of the Underground Railroad, and sheltered escaped slaves who fled north to Canada. According to Alfred, Wayne Manor had been home to six generations of Waynes.

Although there was a vast network of limestone caverns that ran beneath the manor, Martha Wayne filled the house with warm furnishings and flowers from the greenhouse. Many of the antiques in the estate had been passed down through multiple generations, such as the mahogany furniture.

In Batman's second year, Wayne Manor was the site of a Halloween Party, although the event ended up spoiled by one of the guests, Ian Chase, who harassed another guest, Clarissa Rodriguez, and thus forced Bruce Wayne to throw him out.

Though the player could only explore the Batcave, the elevator to Wayne Manor could be seen, and was briefly mentioned near the end when Bane broke into the Batcave via Wayne Manor.

Ferris Boyle received The Wayne Foundation Humanitarian Award at the New Year's Eve Party hosted by Bruce at Wayne Manor in the Ballroom. Before the party could start, Mr. Freeze crashed the party and he alongside thugs belonging to the Penguin took the guests hostage. Bruce quickly ran to the Batcave to put on the Batsuit, but afterwards, Penguin's Henchmen set the manor on fire under orders from Penguin himself (as Penguin had a feud with the Waynes for the latter family ruining his). Batman rescued the hostages from Freeze's men in the Library, and advised Alfred to turn on the sprinkler systems. Batman then rescued Ferris, but Freeze encased Batman in enough ice to temporarily stun him with his Freeze Gun and took Ferris away. Batman broke free, but arrived too late as Freeze and Ferris were extracted via helicopter from the Ballroom. Batman interrogated one of the remaining henchmen, who said their arms dealer, who was in South Gotham, knew of their location. Batman summoned the Batwing and traveled to South Gotham.

During the Arkham City Incident when Bruce was incarcerated in Arkham City, the TYGER Guards infiltrated Wayne Manor, but were in turn, disposed of by Nightwing, Robin, and Alfred. Some henchmen from the Joker and Penguin also tried to infiltrate the manor, but were taken out as well.

Although it wasn't accessible, Wayne Manor could be seen from Gotham City and was a solution to the Riddle: "A million dollar home for a spoiled child, his parents are dead but his parties are wild". Following The Knightfall Protocol at the end of the game, once all of Gotham's Most Wanted Missions were

completed, Bruce returned to Wayne Manor and the press was waiting for his arrival. Immediately after Alfred closed the door with Bruce inside, an explosion destroyed the manor, but it was not known for certain whether the Batcave was destroyed or whether Bruce and Alfred were killed in the explosion.