The Wing-Ding is a boomerang-shaped throwing weapon used by Nightwing as a non-lethal ranged attack alternative to firearms. It was Nightwing's counterpart to Batman's Batarang and Robin's Shuriken.

Wing-Dings stunned enemies that didn't see them coming. In combat, Nightwing could chain them into his combos. 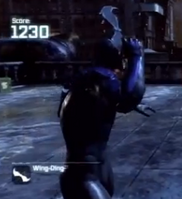