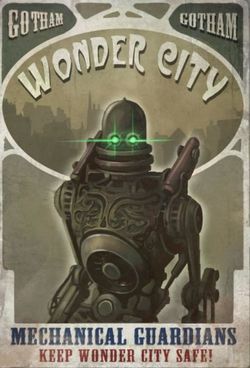 Wonder City (also identified as Old Gotham) was an abandoned city that was located below North Gotham City which housed one of Ra's al Ghul's Lazarus Pits. It was an actual city while Ra's developed the Lazarus Pit. Ra's eventually returned to Wonder City to replenish himself from the pit and planned the events that took shape in Batman: Arkham City.

During the 19th century (around 200 years before the events of Arkham City), Ra's al Ghul stopped in what soon became Gotham City (a crime ridden location even back then) and unearthed an unknown Lazarus Pit beneath the ground with plans to purge all criminals. However, Ra's eventually stumbled upon something much more intriguing: Solomon Grundy also known as Cyrus Gold, who was murdered and dumped into Slaughter Swamp near the outskirts of Gotham. It appeared that the beast was created as a product of the strange chemicals that were in the swamp and the storm that raged the very same night Cyrus was murdered. Ra's had Grundy captured and taken to his private medical chamber where he ruthlessly experimented on the monster to understand how he came back to life.

Locating the chemicals that revived Grundy, Ra's realized that the substance had amazing properties and was capable of rejuvenating a person even in death. It would seem that the electricity from the lightning from the storm that same night had amplified the chemicals and allowed Grundy to absorb its abilities. Ra's named this substance Lazarus. Ra's had plans to use it to not only keep himself alive for years, but to also use it as free, renewable energy for the people of Gotham. However, Ra's feared that he would fall victim to the same fate as Grundy if precautions were not taken and, as a result, began to ruthlessly torture and electrify Grundy while exposing him to Lazarus every time he was killed to revive him. Studying the results every time that Grundy was revived, Ra's altered the nature of Lazarus to suit his needs and eventually made the substance pure. All that was needed was enough exposure to electricity to make the pit a fountain of youth.

Ra's then approached Gotham City Hall and negotiated to obtain the deed for the city itself. While the city council members found Ra's negotiations amusing and ridiculous in nature, they soon took him seriously when he showed them more gold than they had ever seen in their lives from his old country. Ra's was soon awarded the deed, immediately set to work, and commissioned a new project to eradicate crime in Gotham, which was Wonder City. Importing slaves from his country, Ra's had them build this new city, brick by brick, while he developed robots from amazing technology that was way ahead of its time. The robots were known as the Wonder City Mechanical Guardians. With the city completed, Ra's powered the foundations with the Lazarus chemical, and made it a seemingly safe and renewable source of energy.

However, while the residents of Wonder City celebrated Ra's as a genius and a hero, Wonder City was actually a front to cover a violent and sinister conspiracy that served Ra's megalomaniac desires. Behind the scenes, hundreds of criminals and even potentially innocent individuals were captured and violently murdered by the Wonder City Mechanical Guardians. In the meantime, Ra's had perfected the crown jewel of his city: Wonder Tower which rose over the entire city as a monument of prosperity, but was actually part of

Ra's experiment to test the Lazarus Pit. Wonder Tower was actually a mechanism that connected to the Lazarus Pit through a complex network of pipes and attracted electricity during lightning storms, which amplified the chemicals of the Lazarus Pit and allowed Ra's to recover from any physical injury. Upon this amazing discovery about Lazarus, Ra's kept depending on the pit to devastating side effects: it was driving the citizens of Wonder City insane. Violence, crime, and riots erupted onto the streets in a maddened fashion the likes of which Gotham had never seen before. Ra's refused to admit that his actions had caused the biggest crime wave in Gotham's history, did little to nothing to save his own city, and was completely blinded by his obsession with the Lazarus Pit. When Ra's failed to act, the newly instituted City Hall did and ordered for the police to shut down the city, took all the residents straight to Arkham Asylum to be treated, and went to arrest him.

As the troops went throughout the city, and arrested all of the residents, Ra's vanished and abandoned his once prime utopia. Wonder City was almost completely destroyed from the raid and was shut down, with the new Gotham City being constructed over it as the years went on. Solomon Grundy in the meantime was left broken: physically, emotionally, and mentally, from his continuous torture and hundreds of deaths at the hands of Ra's. When troops discovered the beast in Ra's medical chamber, he viciously murdered them all and waited in the chamber for Ra's to return to murder him again. The Cyrus Pinkney Institute for Natural History would soon be built over the medical chamber containing Grundy and the Monarch Theatre would be built above the Lazarus Pit. Ra's eventually left the pit. Wonder City was subsequently abandoned until Arkham City took shape.

Ra's eventually returned to Wonder City and the Lazarus Pit and formed a master plan for Arkham City. He drilled through the old Wonder City streets and the streets collapsed, but Ra's kept digging. He eventually used the Lazarus Pit. During the present time, Gotham was a huge city around Wonder Tower and Gotham North became Arkham City. Ra's made his master plan with Hugo Strange for Arkham City. Batman came to the long abandoned Wonder City to collect a sample of Ra's blood to save himself from the poison that the Joker gave him. After scanning the long-abandoned Wonder City Mechanical Guardians, Batman found Ra's and his daughter Talia al Ghul in Wonder City and he explained that he wanted to be the next leader of the League of Assassins.

In truth, Batman just needed Ra's blood, as explained above. Batman took the Demon Trials and eventually took on Ra's at the Lazarus Pit. After a huge fight, Batman eventually beat down Ra's and told him to call off his crusade or he would be back for him. Later, in the main story, at the top of Wonder Tower, it was discovered that Ra's was the true power behind Arkham City and he wanted to destroy mankind forever as he stabbed Hugo Strange through the back with his sword. While Ra's was explaining his plan to destroy mankind, Strange activated Protocol 11: the destruction of Wonder Tower. Ra's and Batman both escaped the tower, but Ra's unsuccessfully drove his sword through himself in an attempt to kill Batman. Batman threw himself away from Ra's, and Ra's killed himself; his body fell and was impaled on the Arkham City "A". Ra's body vanished shortly after his death, and its whereabouts are unknown.

The Lazarus Pit inside Wonder City was destroyed after a huge battle between Joker, Clayface, and Batman which resulted in the floor of the Monarch Theatre being destroyed. The Lazarus Pit was destroyed by Batman knocking Clayface into it. This was also the location where the Joker died.

After the Arkham City crisis, Harley Quinn escaped from custody and holed up with her gang together with several kidnapped cops. Sometime during this, she repurposed several Wonder City Guardians to act as additional cannon fodder against Batman and his allies. Batman was thus forced to contend with these Guardians while defusing the bombs setup within Harley's hideout.

After being released from custody, Riddler began devising a way to fill the vacuum of power left by the Joker. He designated Wonder City as his new headquarters, sending out emissaries to recruit accomplices and allies, showing them the potential of Wonder City and building a network of alliances for the future. Riddler then rounded up as many Wonder Guardians as he could as well as the wealth of material left by Hugo Strange's Tyger initiative.