Wonder Tower is the base of operations for TYGER and where Hugo Strange was for most of the game. Batman invaded it to stop Protocol 10. It was also a part of Gotham history as seen in Batman: Arkham Origins.

Wonder Tower appeared in Gotham City and was located in Sheldon Park. Shiva instructed Batman to go there during the Christmas Eve Incident. There, she and her ninjas tested him in combat. Batman defeated Shiva and her ninjas, but she escaped.

The tower as well as the elevator leading to the Observation Deck is inaccessible throughout the main game.

Portraits of the tower in three different stages of construction could be seen hanging in the Wayne Manor.

After Hugo Strange had brainwashed Quincy Sharp, he built a large wall around a portion of the city, built a tower for his base, threw both of Arkham Asylum's and Blackgate Prison's inmates in, and called it Arkham City, with a plan to kill all of the inmates. Batman invaded Wonder Tower to stop the plan, and discovered that Ra's al Ghul was behind Arkham City. Ra's said that Wonder Tower was used to perfect his Lazarus Pit, after he stabbed Hugo Strange through the back with his sword, and the latter activated Protocol 11; which detonated explosives in the tower.

As Batman and Ra's fell, Ra's tried to kill the Dark Knight one more time by stabbing his own sword through his chest when Batman tried to save him, but failed, and Batman let him fall. Ra's landed on the sharp "A" tip of the front gates of Arkham City to his apparent death.

Wonder Tower could been seen from Miagani Island during the game, along with Arkham City, Pioneers Bridge and New Gotham from Arkham Origins, as well as Blackgate Prison, Arkham Asylum, and Seagate Amusement Park if you looked really closely. However, Wonder Tower looked different from the version in Arkham City. It was possible that after the explosion caused by Protocol 11, the tower may have been in the process of either being repaired or dismantled.

Batman with Wonder Tower in the background in Arkham Origins.

Batman vs. Shiva in the Wonder Tower Lobby in Arkham Origins.

Wonder Tower at the beginning of Protocol 10.

Batman on the Observation Deck in Arkham City.

Below the Security Control Center.

The inside of the Security Control Center on top of Wonder Tower.

Ra's al Ghul in Wonder Tower after running his sword through the back of Hugo Strange. 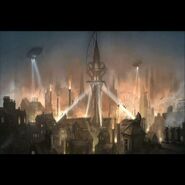 Wonder Tower in Arkham Knight as seen from Miagani Island. 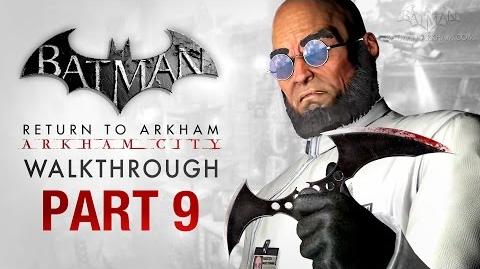 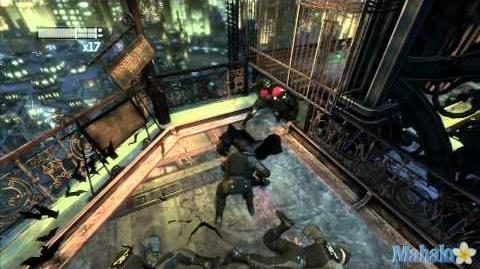 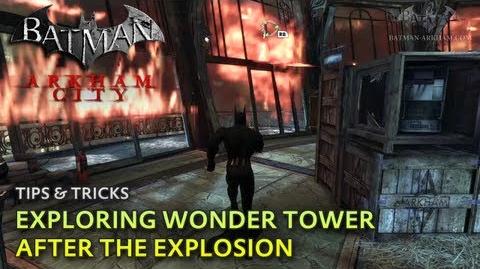